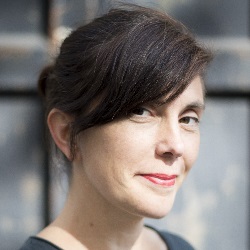 What sort of thoughts do I have immediately after seeing a production? How do my impressions change just a few minutes later? Which experiences have influenced the way I feel about it? How do our standpoints change once we get involved in a discussion? By presenting the audience with her verbal questionnaire, Tina Müller sets the mood for each professional production discussion. Afterwards, she serves up a sugary dessert. The discussion can now begin. The author will then consolidate the most striking and astounding statements from the discussions in a dramatic reading.

Born and raised in Zurich, Tina Müller studied cultural studies and aesthetic practice in Hildesheim and dramatic writing at Berlin University of the Arts. Her plays for young audiences have been distinguished with several awards, including the Youth Theatre Award ("Bikini") and the Mülheim Children ´s Theatre Award ("Dickhäuter"). Her play "Children of Tomorrow" has been invited to this year ´s Autorentheatertage festival in Berlin. Moreover, she is a co-founder of the performance collective magic garden.